The company is clearly client-oriented. For this reason, we adapt our work and we offer the greatest flexibility in our schedules both for client services as well as for loading and delivery. The service that we offer is based on constant assessment by our technical staff, who accompany you throughout the sales and after-sales process.

Although Cementos Molins Industrial, S.A. started its activity in 1997, we start narrating our history many years before, as some of the facilities were active even before the foundation of Ciments Molins in 1928.

2010: THE BEGINNING OF A GREAT CHANGE. In August 2010, the new Line 6 is inaugurated, with a 126 m high tower, specially designed to become a new architectural and industrial reference in our region. This new production line applies all the technological improvements currently available. It is capable of maintaining the production level of the 3 furnaces that had stopped working, bringing more than considerable benefits to the process.

Improvements in energy efficiency will allow us to move towards a reduction in the consumption of fossil fuels, as well as significant reductions in electricity and water consumption. Line 6 is prepared to incorporate the use of alternative fuels, a factor that will facilitate the reduction of all emissions, especially CO2. To meet these objectives, in the second half of 2011 a Biomass feeder and a feeder for fuels derived from waste (RDF and others) will be incorporated.

In accordance with the commitments established, work began at the end of the decade to dismantle all the facilities that were out of service. The process used, which sought to protect the environment and people, and to reuse the demolished materials as much as possible, made it possible to recover almost 48,000 tonnes of waste, which will be used as raw material in the manufacture of new clinker on Line 6. The old Sant Vicenç dels Horts factory enters history with a final episode (the dismantling) that is an example of Circular Economy and Sustainability, as the care and precision of the works have generated a minimum impact on both the environment and the neighbourhood.

The economic situation at the start of the century continued the improvement experienced in the previous decade, with a special effect in the area where we are situated, that is in cement consumption. The per capita consumption in Catalonia reached 1,000 kg, an historic record, in addition to the international consumption, which will be difficult to repeat for a long time.

Multiple investments were been made during this time dedicated to improving productivity, quality, labour safety and minimising the environmental impact. The coal nave, the new control room and the automated process laboratory are a good example of this.

Currently the plant has an total production capacity of 40,000 tonnes of calcium aluminate cement and 1,600,000 tonnes annually of Portland cement.

Our perspectives for the future that allowed us to begin construction of a new line of Portland cement (no. 6), which would incorporate all the current technological improvements for product quality and respect for the environment.

At the start of the nineties, there was a period of expansion connected with the large public initiatives which were taking place at that time (the Barcelona Olympic Games and the Universal Expo in Seville), which was immediately followed by a recession. However, in the second half of the decade, a new twist occurred and the spectacular recovery of the Spanish economy started, especially in the construction sector.

The market situation led us to welcome new investments. Cast cement production was completely renovated in the plant, by building two new kilns (no. 7 and 8) which substituted the first six. Portland cement production was revised and line no. 3 was updated, which had been discontinued since the start of the decade.

Concern for the environment and the quality of our products also led in this decade to making different investments such as covering the nave of the limestone pre-homogenisation, the clinker silo and the change in the centralised control system.

Market demand required developing a Portland cement which was more resistant to sulphates, in accordance with standard 80.303:96 and attaining the CE marking. Ciments Molins' Quality System was adapted to the requirements established by the IECA and the AENOR and in 1997 it adapted to ISO International Standard 9002:94 and the Company ownership registered in AENOR in February 1998.

Record exportation and improvements in the production processes.

The crisis which set in during the previous decade continued into this new one. Internal consumption continued to decline, as such the export solution reached to its zenith. In 1983, exportation meant 80% of production for Ciments Molins.

The oil crisis required new proposals. In 1981, the mill by F.L. Smidth for coal was set up and slowly stopped consuming fuel oil, returning to the situation from twenty years before. The difference was that now coal was imported from foreign countries.

One year previously, in 1980, a limestone pre-homogenisation installation was put in place. During this decade, separators were installed in the Portland cement mills and the control systems and delivery installations were improved. In short, it was an era of continuous improvements in the productive processes which enabled our products to attain greater quality.

From development plans to the start of a recession

The economic development which characterised the previous decade were still present and the expected cement consumption led to generalised expansions in capacity throughout the cement sector. In July 1974, line no. 5 was set up to produce Portland cement. It was also a line by F.L. Smidth & Co. similar to the previous two, but with greater capacity than the other two combined. With the new line, the production capacity was twenty five times greater than only ten years before.

On the other hand, there was not only growth in volume, but also in product quality, as the new facilities were adapted to the latest developments as investments were made such as a X-ray spectrometer and a IBM-1800 computer for the analysis and automatic regulation of the crude composition, which helped to improve the centralised production process.

The beginning of the decade was also positive for calcium aluminate cement, with production hitting a historic record in 1973.

The factory growth, however, was not accompanied by the expected economic growth as in the middle of this decade a recession begin with the oil crisis, which required us to seek solutions to be able to sell our product. The solution was found in exporting. Ciments Molins partnered with other cement factories, constituting among other companies: Imextrasa, S.A., Hispacement , S.A. y Portcemen, S.A., in order to market the surplus cement of its partners, as well as the loading of our product in the Port of Barcelona, ​​for export.

In the 60s, promoted by the Stabilisation Plan, important economic development took place in Spain which led to a considerable increase in cement consumption.

As such, in 1965, line no. 3 was set up to produce Portland cement. . This was an installation by the Danish company F.L. Smidth & Co., consisting principally of a rotary kiln, a crude mill and another another cement mill. Given the expected consumption set by the Ministry of Industry, in 1968, the construction of a new cement line (no. 4) was started, launching the cement mill in January 1970 and the crude mill and cement oven No. 4 in May of the same year. This line, also by F.L. Smidth & Co. had almost the same characteristics as line 3.

In this five year period, with the assembly of these two lines, an important leap occurred in production, practically multiplying it by ten-fold.

On the other hand, calcium aluminate cement consumption continued to be important, as such a new oven (no 6) was built, which was put in place in 1967.

During this decade, the use of coal was substituted with fuel-oil, which would be stay that way for almost twenty years.

In 1952, kiln no. 2 was set up to produce Portland cement. This was a rotary kiln from the German company Maig, partially built in the Altos Hornos de Sagunto. Two years later, the "Unidan" cement mill no. 2 was set up.

With all this new machinery, together with the Miag crude mill, put in place at the beginning of the 50's, the new facilities to deliver cement and the start of exploitation of the La Fou Quarry in Vallirana allowed for Ciments Molins to strengthen their presence in the Catalan Portland cement market.

At the same time, this decade witnessed an important growth in the production of calcium aluminate cement. Successively, between 1955 and 1959, new cast cement kilns (numbers 3 to 5) were put in place in addition to the first two, thereby multiplying the plant's production capacity.

In this period, importation was obviously difficult: in addition to the Spanish political-economic situation there was the global situation, which was suffering the consequences of the second world war. The importation of bauxite is no exception, as such the production of cast cement was practically nothing.

However, lime and natural cement continued being produced, both in the plants in Vallirana and Pallejá, as well as in the Sant Vicenç dels Horts plant, but the company needed to take a strategic turn.

The leap occurred and in October 1943: kiln no. 1 was set up to produce Portland cement. This was a rotary kiln (Fellner & Ziegler) which was purchased, along with the rest of the machinery, from Cementos Pórtland Pamplona.

Before the decade ended, with the difficulties of importing machinery having eased somewhat, a Unidán cement mill (no. 1) was purchased which clearly improved the quality of our cement.

The change was obvious and the increase in production required us to seek labour beyond the neighbouring towns. The arrival of immigrant labour and their full integration was a great milestone for our company. 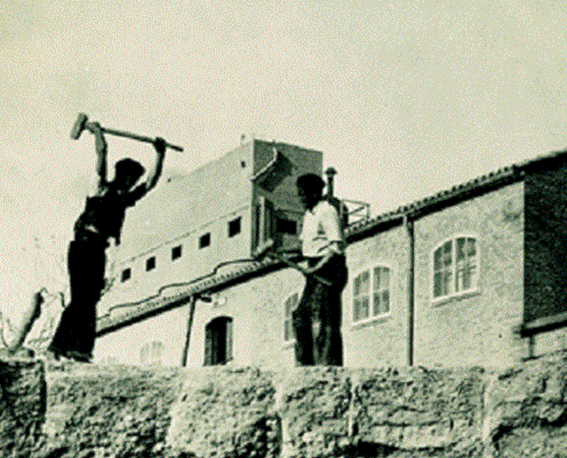 The global economic crisis at the start of the 30's meant a difficult test for the recently created Ciments Molins, which was forced to decrease production due to the decreased demand. In spite of this, the Sant Vicenç plant has expanded and improved its installations.

During the years of the Civil War, the company collectivised (and was taken over by the Catalan Regional Government which declared it a War Industry). In this period, although no investments were made, the plant was properly maintained.

At the end of the decade, with the war over, the interventionist measures by Franco's regime and the supply difficulties were added to the previous issues, thus closing out a decade full of difficulties which could only be overcome with everyone pulling together. 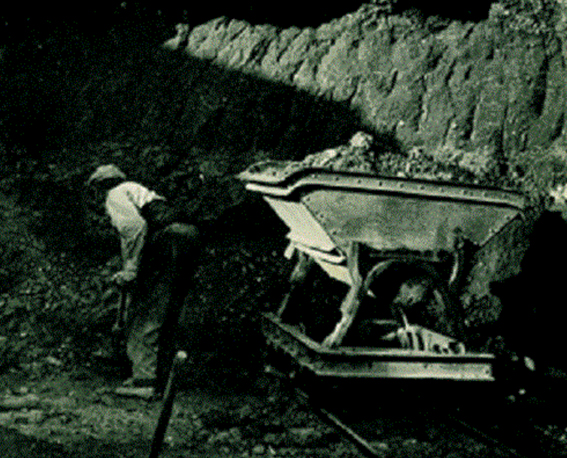 Since the mid-19th century, the Molins family utilized different lime kilns and natural cements in the area of Pallejá. Later they would do the same in Vallirana and Campins. In 1919, they acquired a parcel of land in Sant Vicenç dels Horts, the centre of the current cement factory, where they installed two kilns similar to the ones they used in Pallejá and Vallirana.

With the creation of Ciments Molins in 1928, a new goal was established: to start manufacturing cast cement, a new cement in Spain, today called "calcium aluminate" cement. With this goal, a reverbatory furnace was set up in the Sant Vicenç plant in 1929 and a second one a year later. . Calcium aluminate cement is the result of fusing limestone and bauxite; its main feature is that it reaches very high initial resistances, an aspect which differentiates it from Portland cement, while it also has refractory properties which allow it to be used in other types of applications. Since then the new product has been sold throughout Spain and has even been exported to countries like Morocco, Turkey and Argentina since the 30's.